The history of the Teddy Bear

There are conflicting stories regarding who created the first Teddy bear, but the two most accepted come from the United States and Germany. Both credit former US President Teddy Roosevelt for the birth of the Teddy bear.

In 1902 President Theodore Roosevelt was in Mississippi conducting meetings over a boundary dispute. He took a day to relax by engaging in one of his favorite activities, bear hunting. It was not a productive day for the President; he could not find a single target. The hunters that were with him wanted to help him get his trophy, so they captured a young bear and tied him to a tree. When Teddy Roosevelt saw the bear he refused to shoot it. He didn’t feel that shooting a captured bear was true to the sport, so he had the hunters let the bear go free.

The Washington Post printed the incident for the world to see. Along with the story was a cartoon illustrated by political cartoonist Clifford Berryman. He drew a picture of a bear cub with round eyes and large ears tied to a tree. Next to the cub stood Teddy Roosevelt. The article and cartoon were printed in the November 16, 1902 issue of the Washington Post.

Meanwhile, a Russian immigrant named Morris Michtom and his wife, Rose owned a confectionery and stationery shop in Brooklyn, NY. Rose saw the article in the Washington Post and decided to make a jointed, stuffed bear in the image of the bear cub in the cartoon. When she finished it, she attached a for sale sign to it and put it in her shop window, calling it Teddy’s bear. Alongside it she put the newspaper clipping. It sold immediately. Sales of Teddy’s bear boomed and soon were taken over by the Butler Brothers, a US toy wholesaler. In 1903 they formed the Ideal Novelty and Toy Company and in 1938 changed the name to the Ideal Toy Co. 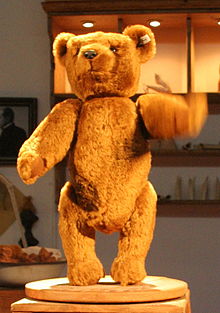 Replica of the teddy 55PB of Steiff

The Germans’ version of how the teddy bear was born is a little different. They claim the first Teddy bear was created by the Steiff Co., owned by Margarete Steiff. Margarete was crippled from a childhood bout of polio and was confined to a wheelchair. She enjoyed sewing and began making stuffed toys from felt. Her nephew, Richard Steiff, was an artist and drew some sketches of animals after watching them at a local zoo. One of the animals was a bear. Margarete created a stuffed bear based on that drawing. This bear was exhibited in a toy fair in Germany in 1903. It caught the attention of George Borgfeldt, a US wholesaler. He ordered 3000 of the bears to be sold in the United States. Because of the Berryman cartoon, stuffed bears were big sellers in the US and Steiff supplied many of them. So, in 1907, Steiff started calling the bears they made Teddy bears.

Whichever version is the accurate version is unknown. But it seems to be no coincidence that the height of the Teddy bear craze coincided with Roosevelt’s second term in office, 1905-1909. This causes many to believe that Theodore Roosevelt, the 26th president of the United States, is truly the father of the Teddy bear.

A 1902 political cartoon in The Washington Post spawned the Teddy bear name.